If you've seen one recruitment advertising campaign, you've seen them all. At least that's what most American job hunters think. According to a Gallup poll, the State of the American Workplace, the majority of job seekers are disengaged and they need a clearer picture of what a prospective job entails. If your ads are more like an episode of Dragnet, Just the Facts, there's a lot left to be desired, which might explain why you aren't getting the results that you need.

Considering the short attention span of most everyone who uses the Internet, you've got mere seconds to pull out all the stops and grab a candidate's attention. Once that's accomplished, then you can get down to the specifics of the job. How do some of the most creative companies do it? It's not with HELP WANTED in a bold font, that's for sure. Here are four of the most creative ads that you've probably ever seen.

In the current climate with immigration such a hot issue around the world, it takes some real pluck to run a job ad that glaringly says, "We don't hire Turks, Greeks, Poles, Indians, Ethiopians, Vietnamese, Chinese or Peruvians."

But read the fine print:

To get attention, sometimes you have to rely on shock value and blow a few minds. At first glance, McDonald's was downright offensive. And then upon closer examination, they showed that the opposite was really true.

#2: Maybe it Takes a Blow to the Head 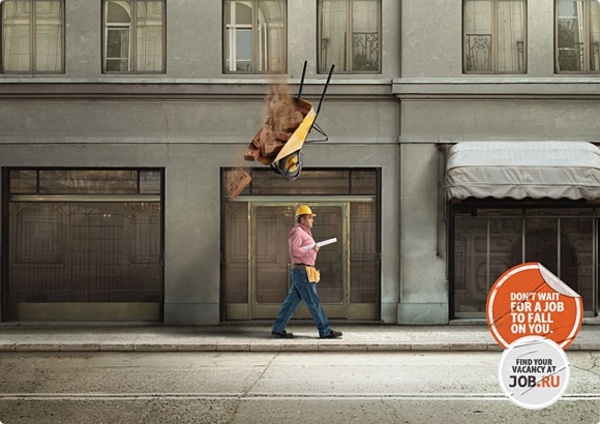 Some days it doesn't pay to get out of bed. But some days it really does.

Or maybe not. Some of the best ads spell out nothing about a job, but direct candidates to the right place. And irreverent humor is a timeless way to make people stop, think and maybe shake their heads.

RELATED: How Recruitment Advertising Can Be More Like Regular Advertising

The Russian job marketplace, Job.ru, ran a series of ads that featured hapless workers in cringe-worthy, precarious positions. The text said, "Don't wait for a job to fall on you." It's simple, motivating and true. Most job ads don't fall out of thin air. 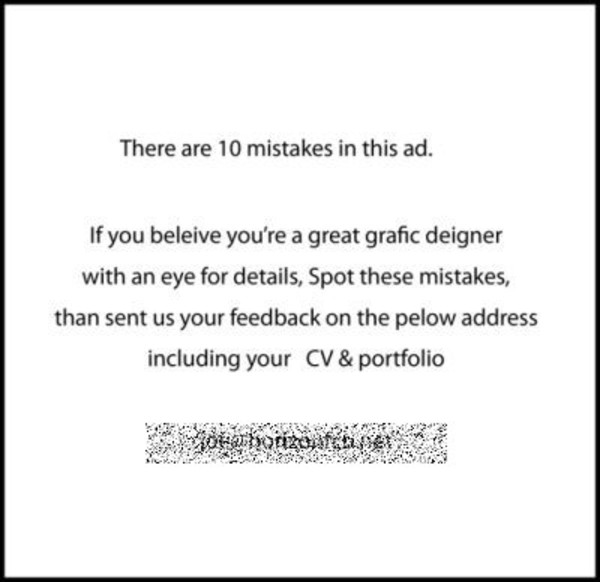 This is a test.

One clever approach that's enjoying some traction is the combination job ad / test. If you can solve the puzzle, you can apply for the job. Some of them are fairly simple, such as the "Ten Mistakes" example above. And some are so complex that it's impossible to apply without successfully completing the test.

Some companies run ads with problems whose answer is the contact information needed to apply. That's one way to sort out people who have at least some of the required skills.

Help candidates get the point.

Creative companies aren't the only ones who can use bold imagery with a play on words. But this creative agency took tools of their trade and a familiar legend to get their point across in a simple, stunning way. "We thirst for more creative blood," complete with red drawing pencils arranged in a vampire fangs display.

What makes your company different? What's its angle? Or what might its angle be? Your competition might be asking the same questions, or at least they ought to be. Think about what's trending in the media and how you can relate it to your company. When this ad came out, there was at least one popular vampire television show on the air and a host of books on the shelves.

Being clever works for both of you. It shows that your company isn't full of stuffed shirts. And it also shows that the people who are attracted to the ad speak your language.

Strive to be different and capture attention as quickly as you can. Once you've got them, then you can direct candidates to your stellar job description where more details are waiting for them to learn.

RealMatch helps recruiters and hiring managers make better hires. The job ad is only the beginning. We help place your ads in front of the right people for the best connections.

Subscribe to Recruitment ADvisor today and learn more about our candidate matching is technology whose time has come.

Get the Most Out of Reference Checks in Your Recruiting Process

The recruiting process is made up of many elements, but reference checks don't always rank…

Should You Ditch the Annual Performance Review?

Why Open Ended Questions Will Improve Your Sourcing Efforts

Give a person a dead-end question and you'll usually hit a dead end. That is…