After hearing the same old thing again and again, people start to believe it. But are newspapers dying? No; far from it. They're only changing. And change, as it goes, can be good.

A few positive voices can be heard above the negative din.

You should listen to them. They're right.

The news isn't one thing, it's many things. The way that information is shared these days isn't the same as in your parents' and grandparents' day. But nothing is wrong with that. They had print newspapers, radio and television. Now we have those things plus digital, and the possibilities are virtually endless.

That should feel like a challenge to do more, go farther and take the industry to places it's never been. Some of the more progressive and fearless publishers are doing exactly that.

According to News Media Alliance, the audience is bigger now, not smaller.

"All evidence shows that people of all ages want and consume more news than ever. We need to focus on new ways to address the needs of audience"

Millennials might get news in bite-sized chunks and Generation X might sit at a computer and read stories at a publisher's website. Baby Boomers might do a little online news surfing as well as catch the news in print. But the desire is there. And that means there's no reason to think the industry is anywhere near drawing in its death rattle. 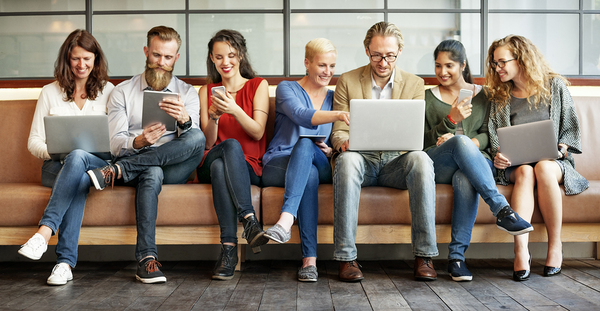 Print is powerful, but digital is for everyone in your audience.

#2: Digital is the Right Direction

Should we, or shouldn't we? Is digital really the right direction, especially when print still brings in more revenue?

Absolutely, and here's why: print's numbers are falling consistently while digital's numbers keep getting stronger. It's only a matter of time before digital overtakes print in every way, including ad revenue.

Gains might not happen fast enough to suit anyone's taste, but the facts show that they're happening. News interest is growing, digital is everywhere, digital ad spend is on the upswing and white print is still in front, it's tumbling downward week after month after year.

If you're on the digital-centric train, don't doubt yourself. It's the right direction. All evidence supports it. But mobile-first is coming up fast.

Although the stats on newspaper advertising trends aren't thrilling, newspaper profits are showing some promise. And advertising isn't just display or banner ads.

There's also impressive growth in revenue from job boards, native advertising and something else: paid search for existing content. That's a new way to monetize the content you've already got.

The World Association of Newspapers and New Publishers (WAN-IFRA) says a French startup has built a paid search made for journalists to help simplify research. It allows journalists to find quotes and then it compiles them into embeddable quote cards.

The New York Times found another way to monetize existing content with NYT Cooking by Chef'd. Their membership-based meal plans are based on recipes they've already published.

Here's some information that might shock you, and it's from Larry Kilman for WAN-IFRA. He cites their annual World Press Trends survey.

"Newspapers generated an estimated US$179 billion in circulation and advertising revenue in 2014 -- larger than the book publishing, music or film industries. Ninety-two billion dollars came from print and digital circulation, while 87 billion came from advertising."

Ad revenues don't have a strong enough heartbeat just yet. But circulation is stable, says Kilman. But the audience is where the revenue is at, and innovation can help publishers tap into it.

The decline of newspapers in the early 2000s shifted the industry into temporary life-support mode. But the future of newspapers is innovation, and it's just getting started in the 21st century. People of all ages are still hungry for news.

Millennials might not get their news the same way as Gen X or Baby Boomers. But audience interest and industry commitment mean the future is bright.

If anything is true about the digital age, it's that new possibilities exist around every corner. There are existing trends and ideas worth fleshing out. And tomorrow, who knows what a new crop of movers and shakers will bring to the table.

Feeling energized and optimistic? Ready to ramp up business in 2017? Subscribe to Recruitment ADvisor and get new content delivered right to your inbox.