It's a veritable rollercoaster for newspaper publishers. News media revenue looks promising but gains can't happen fast enough. Advertising revenue dips, but new ad revenue possibilities emerge. Anyone could get whiplash from all of the ups, downs, stops and starts of operating a profitable newspaper. What brought us to where we are today? There's one overarching theme and several that churn underneath.

The age of information brought about plenty of news competition, some of it blatantly fake, and it offered Big Data about every decision and action that online users make.

It's anything but boring, this newspaper publishing business. Here are 4 prevailing themes that have brought the news media to where it is today.

One of the greatest advances in advertising revenue was the development of programmatic ad buys. Programmatic cuts out the time-consuming and imprecise tasks of manually selecting when and where to place which ads for what product.

Digital ad buys weren't complicated at the inception of the great big World Wide Web. Companies that wanted to buy digital ad space had only a few formats from which to choose. Remember the first banner ads? Not only were they primitive by today's standards, but only a handful of companies had digital ad space for sale.

Then the Internet grew in such an explosive way that advertisers were left with too many choices and not enough time to sort them out. Things grew complicated in a hurry.

Programmatic, says Econsultancy, is simplifying ad buys by replacing all of the manual legwork and guesswork with intelligent automation. It's not just automatic, it makes the best ad buy decisions based on available ad space, budget and impression information available at the time.

Here's the short of it:

Other models are emerging, such as programmatic ad buys for job boards.

What's even more impressive is the ability to bend and flex as new information is available. If the same nurse has decided on a career change and is about to graduate with a tech degree, they might very well see an IT job ad after all.

It's all built around Big Data, which is the big game changer of the 21st century.

How does this benefit newspapers? More advertising revenue.

As publishers work their way through the malleable maze of revenue, every step in the right direction counts. Programmatic sends more ad revenue to publishers. Job board ad revenue is a growing slice of the pie, as the traditional classifieds slowly fade into obscurity.

When people are accustomed to getting something for free, chances are they'll balk at a fee-based system later on. That's what happened with digital newspapers, but the chill is beginning to thaw and more readers are subscribing.

In some ways, it seems like the Internet has been around forever. It wasn't too long ago that the first ever web page launched. It's not much to look at now. In fact, it resembles an ordinary Word or Pages document. Decades ago, it was the pinnacle of technological advancement.

For most of the Internet's life, information has been free of charge. Anyone could build a web page, and anyone could access it without paying a dime. In time, more and more information came available, still for free. There was even an era of free music and movie downloads, even though they flew in the face of copyright laws.

The Internet and free information have always been the very best of friends. That's great for users. Unfortunately, it's a bit of a let-down for the newspaper publishing industry.

Just as people have always used the Internet for free, people have also always paid for newspapers. If you swiped a paper from a newsstand, chances are you'd be chased down by a fellow who expected a few coins in return.

Then the inevitable happened.

Many newspapers had at least a rudimentary website and published some content online throughout the mid to late 1990s. In the early 2000s, newspapers took the Internet a bit more seriously, but virtually none of them turned a profit for their efforts.

As people grew more dependent on websites for news, print newspaper readership dropped off. It was a natural shift, but still not a profitable one. The snag happened when publishers asked for the one thing readers didn't want to give: money.

You'd never be the person who ran away from a newsstand with a paper. But news consumers are so accustomed to free online content, the idea of paying for it, even though it's news, doesn't compute.

The ''free content'' mindset has done more to harm the profitability of newspapers than anything else, except for perhaps the reading public's aversion to annoying ads and the advent of ad blockers that stymie revenue.

Newspapers still wrestle with sorting the revenue issue. Fortunately, gains are being made and more people are subscribing. As inflamed as the recent presidential election was, newspapers reaped the rewards of more subscribers. The revenue tide is hopefully changing for the better.

Ouch! Who would have imagined that reputable companies would voluntarily place ads on a not-exactly-news entertainment site? It happens frequently these days, but at least some advertisers are getting the message.

It's a side-effect of programmatic ad buys, but a solvable one. With total automation, ads might very well land at a site that the advertiser would never intentionally support.

Wired added to the discussion in December with an article about major name brands that yanked ads from a notorious, unabashed fake news site.

The publisher insisted that it was censorship, but Wired suggested that the advertisers only did what any reasonable brand would do. They pulled their ads and with them, their financial support.

At the heart of the issue is a total reliance on automated ad buys without checks and balances. Programmatic advertising is revolutionizing the way that companies find and purchase ad space. However, even the smartest algorithm needs human guidance from time to time.

It's not as complicated at it might seem. According to Wired, tech companies that specialize in programmatic ad buys can mute sites that advertisers don't want to support. Afterward, automation can get back to the business of simplifying the advertiser's life as well as that of the publishers.

Real news sites will have a better slice of the ad market once the fake sites are silenced one-by-one. If Twitter crusaders have anything to do with it, big brands won't have to look far to learn whether they're supporting the wrong side of the fence. 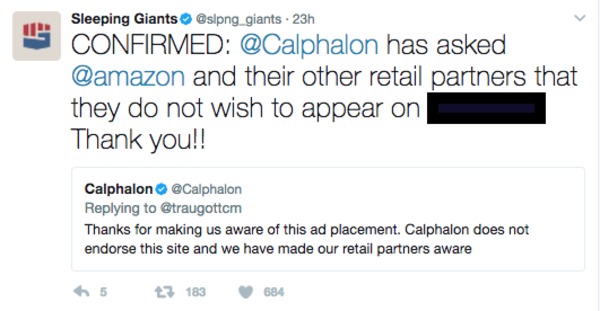 Some companies, says Wired, have begun curating a "blackballed" list of fake news publishers where they'll never intentionally place ads. They more businesses learn about who to avoid, the more they can rest easy about programmatic ad buys.

It's a real conundrum. People consume information at an astonishing rate. Newspapers are in the business of providing information. Yet revenues, while improving, are still a shadow of their former selves.

Print advertising clings to its 1st place revenue spot with digital coming in second. Digital is still growing, though, and print continues to decline. Print's reign probably won't last much longer as digital is on a trajectory to eventually overtake it.

According to the New York Times, their digital revenue is growing and expected to continue. Subscriptions are up, as well. Meanwhile, print revenue dropped 20 percent. Total ad revenue is expected to dip at the Times, but they also explain that digital is predicted to grow by at least 10 percent, if not 15.

Still, it doesn't matter if the consumer wants to pay for news or digs in their heels to insist that it must be free. Publishers require revenue to stay in business; without it, they're toast.

So the biggest hurdle in the 21st century has been, and remains, making newspapers profitable in an age when people want the product but insist that it come at the low-low price of ''zero.''

One could argue that if publishers held out long enough for fake news sites to play themselves out, and for advertisers to feel the sting of being discredited for supporting fake news, real news would rise again.

It wouldn't happen overnight. Worse, the result could be a ground-up reinvention that few, if any, newspapers could survive.

Although the Warren Buffett has remained bullish about newspapers for the past several years, even the Oracle of Omaha believes the current climate is a real head scratcher. In an interview with USA Today, transcribed at CNBC, Buffett nodded toward The Wall Street Journal and the New York Times as two newspapers that get digital right. The Washington Post, he says, is another newspaper that's working in the right direction.

''They have developed an online presence that people will pay for.''

And that's really the bottom line, at least for now.

The newspaper industry is still wobbly, but it's getting stronger. Smaller publishers feel the sting of few paid subscribers and thin advertising. Fortunately, as the industry is morphing into something that no one could have predicted, tools are evolving, as well.

Legendary publishers, such as the Times, Journal and Post, are helping usher in the new era of profitability. Their resources and ability to withstand setbacks have helped shore up the foundation for newspaper growth, which other papers can both learn and benefit from.

Advertising is still both mandatory and frustrating. Fortunately, that's evolving, too. Even better, you don't have to be a legendary company to reap the rewards.

If that sounds like the path you want to take, subscribe to Recruitment ADvisor today. We'll deliver new, relevant content to your inbox on the regular.

Why would anyone invest in something that's on its way out? All forms of legacy…