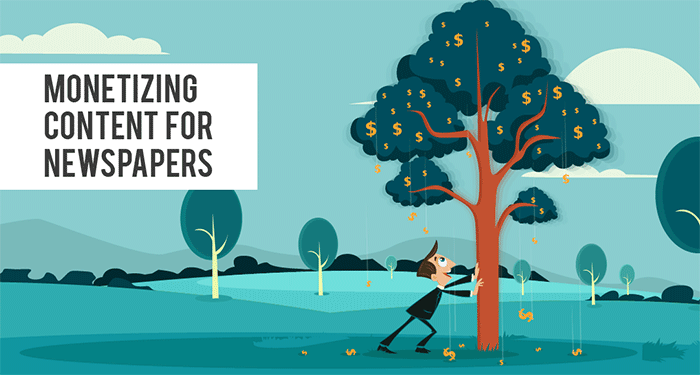 Some news organizations are seeing year-over-year incremental growth in revenue. However, most of them are seeing declines.

There are two metrics that are of particular concern to media companies, the first of which is digital ad revenue. For most of the newspaper industry, that number grows, but by less each year.

Consider the trend in digital advertising year-over-year revenue growth over the past four years:

There's no word to describe that except: "Ouch!"

Before the recession, digital ad rates grew between 18% and 31%. Compare that to today's numbers and it's not difficult to see that the sector is definitely in trouble.

Not only that, but digital advertising market share for newspapers is in the single digits. As of this writing, newspapers only take about 8% of all digital ad spending. That amount is shrinking annually as well.

Also, the areas where digital ad revenue, across all sectors, is experiencing high growth rates are in those areas where newspapers are particularly weak. These include mobile ads (up 110%), digital video ads (up 19%), and performance-based ads (up 66%).

SEE ALSO: The Explosion in Digital Ad Spending and What It Means to You

So what can newspapers do to turn this around? One suggestion is to stand on the shoulders of a giant in social media. Facebook is now becoming an advertising engine, plus it's a platform that enables people to share articles of interest with their friends. Put those two opportunities together and newspapers can find a place to partner with Facebook.

The second solution is to focus on the second revenue metric important to newspapers: circulation revenue. With a marketing strategy that seeks to boost reader revenue, newspapers can make up for the awful performance of digital ads.

Usually, newspapers gain revenue with content that is visible only to subscribers. Subscribers, of course, pay money.

The trick there is to provide content that is compelling enough that people actually want to pay for it. Some newspapers display the lede as well as the headline to unsubscribed readers so as to provide an additional incentive for a new potential customer.

Of course, marketing departments are also stuck with establishing pricing models for subscriptions. If the prices is set too high, there won't be enough subscribers to generate a substantial amount of revenue. If the price is too low, the company risks losing revenue that it could have gained with a higher subscription rate.

While digital advertising is clearly declining, there are several opportunities for newspapers to boost their revenue. They are, however, tricky options and should be explored with due diligence.

Established names in television, including MSNBC, NBC Universal, and CBS are entering into partnerships with…

Our Favorites for June

If you are not already subscribed to Recruitment ADvisor, make sure you subscribe now so…