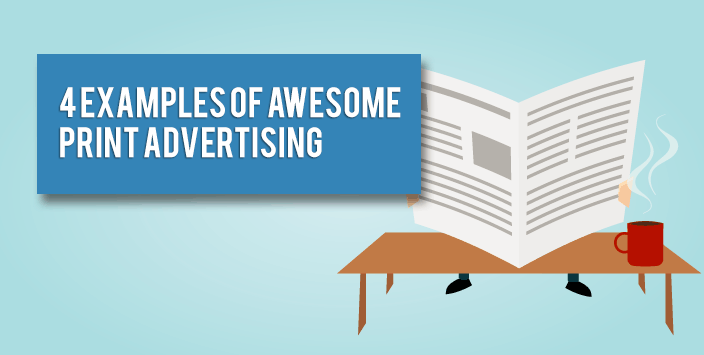 According to Journalism.org, print advertising in 2013 was worth approximately $17.3 billion, which was a slight drop from 2012. But even with a drop in print advertising revenue, there is still a strong need to get a point across to an audience in print. The key to good print advertising is to be creative and it never hurts to pull a little inspiration from the good works of other when it comes to putting together your own hard copy marketing.

When Kawasaki wanted to advertise its Ultra 300 Jet Ski, it wanted to reach its audience in a way that would show just how much more power the Ultra 300 offered over the competition. The result was an ingenious ad that showed a mathematical equation that showed 300 horsepower raised to the power of a Great White Shark. You don't have to be a Jet Ski expert to get the message and understand the power of the Ultra 300.

When candy companies advertise their sugar free candies, it can be difficult to show consumers that their candies are actually void of sugar. Spanish candy maker Chupa Chups is known for its more than 150 types of lollipops, but the company really wanted to let people know that its new line of sugar free products is actually sugar free. The resulting print ad shows a lollipop lying on the sidewalk with a double trail of ants walking around it. That would appear to be the ideal representation of a sugar free product if ever there was one.

A Monument To Freedom

Sometimes a powerful message accompanied by the right images can create very powerful print ads. When Harley Davidson want to make an impact in its print advertising, it decided to tell the story of how Czech riders dismantled their motorcycles to hide them in plain sight. The accompanying pictures of Nazi soldiers being unable to identify the scattered items as motorcycle parts created an effective print marketing campaign.

Showing Off The Bacon

When a print advertising ad is so clever, but yet obvious, that it makes you mad that you didn't think of it, then that is effective print marketing. Publicis is a German advertising company that developed the perfect image to represent its client Bed and Breakfast Hotels and the ad was an instant hit. The image is simply a bed with blankets and pillows arranged to look like bacon and eggs, but it is so clever that people cannot seem to get enough of it. This ad is just more proof that anytime you put bacon in a print ad, you have a hit on your hands.