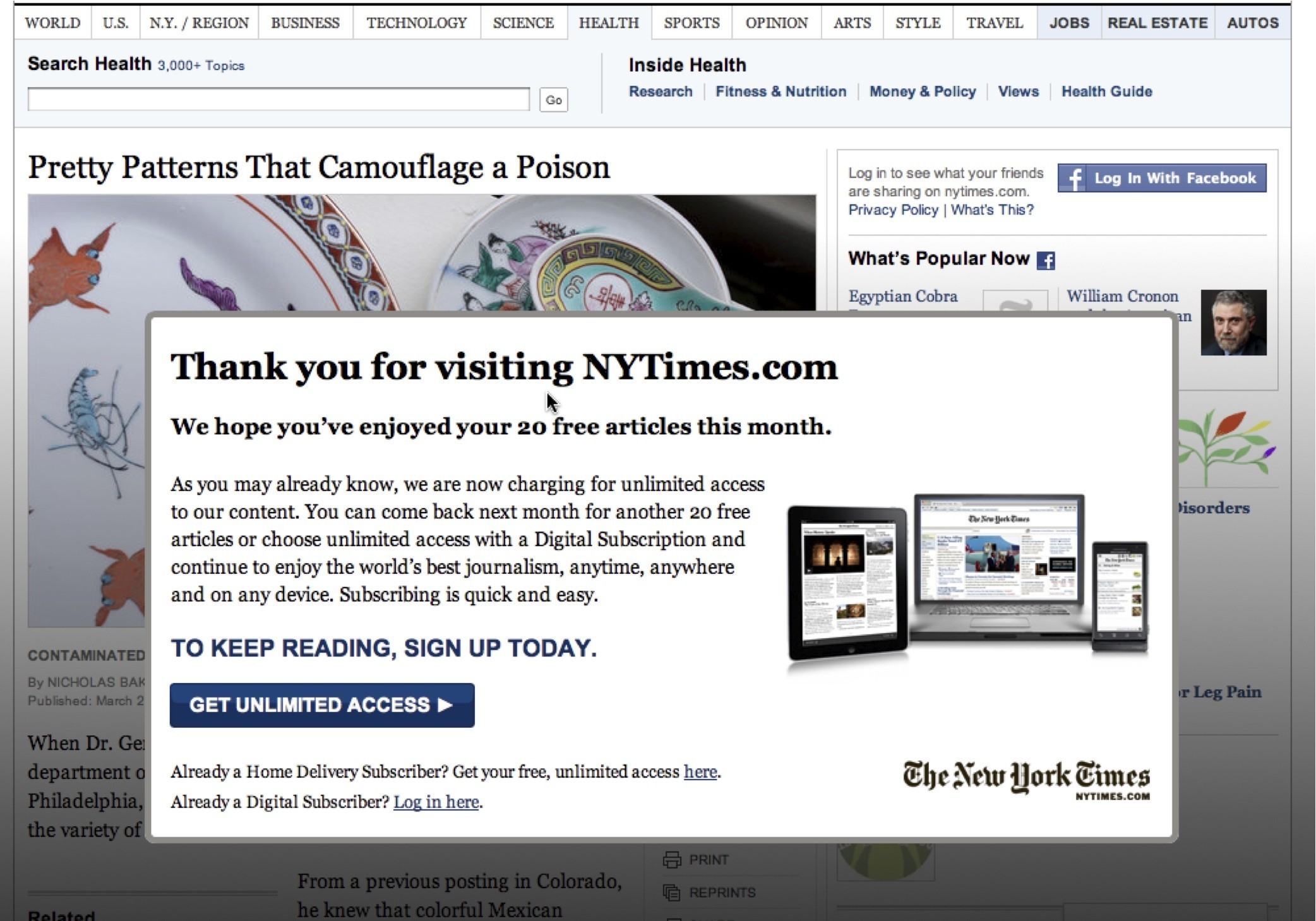 Paywalls as a form of site monetization are no longer unusual, with more than 350 American newspapers now putting content behind a paywall. Though The New York Times is perhaps the biggest American paywall story, it isn't just media juggernauts that are putting them up. Gannett Company, Inc., a mid-sized newspaper publisher, ginned up 46,000 digital-only subscriptions in 2012 by putting up paywalls, with revenue growth from subscribers more than offsetting the company's print advertising losses in the fourth quarter.

Moreover, many of the digital publications that forced print publications to overhaul their business models are putting up paywalls themselves. For example, former Daily Beast columnist Andrew Sullivan put his popular blog The Dish behind a paywall at the beginning of 2013. So if you are considering erecting a paywall as part of your site monetization strategy, you're not alone, and audiences are starting to accept that great journalism can't be produced for free.

Some media watchers point to NYT media correspondent David Carr's keynote address at the 2013 South By Southwest Music and Media Conference as evidence that site monetization for digital newspapers had turned a corner. Describing it as ''a special moment in history,'' Carr debunked skeptics who thought the NYT was courting online obscurity by putting up a paywall. In 2012, the paper's revenues from circulation and digital subscriptions exceeded advertising income for the first time.

You may be thinking, ''Well, isn't that just because advertising revenues fell so significantly in preceding years?'' While that is certainly true, the NYT now has more than 800,000 print subscribers plus nearly 700,000 digital subscribers - enough to bring in $200 to $250 million per year and make the paper sustainable.

In 2011, Steve Buttry, a community engagement specialist, lambasted the NYT's decision to put up a paywall, saying ''Every bit of corporate energy, time and creativity that has gone into this feeble plan is a diversion from the energy, time and creativity that genuine innovation require.'' But by 2013, railing against paywalls by media experts had subsided noticeably.

The Reuters Digital News Report 2013 found that in the UK, a significant increase in the percentage of news consumers paying for digital news had occurred since the previous survey was taken. The survey also found that tablet and smartphone users in the US were much more likely to pay for news, even after controlling for factors like income and level of interest in the news. The study found that it was younger readers, age 25 to 34, who were most willing to pay for news across the countries surveyed.

People are starting to come around to the idea of the news paywall, and while a paywall can be an effective part of a site monetization strategy, it's generally not something you can pin all your revenue hopes on. Other site monetization techniques include things like custom job boards, which are terrific on local (or even hyper-local) news sites and niche publications because of the targeted audiences these sites bring in.

Sponsored content links are becoming popular, and have been quite successful on aggregator sites like Buzzfeed, where the sponsored content is designed to blend in seamlessly with the rest of the site's content. Media technology writer Alan McGlade writes in Forbes that to work best, sponsored content needs to be ''carefully curated for the target consumer and chameleon-like in appearance; blending into environments as unique and diverse as Twitter, Pinterest, Snapchat, YouTube or Buzzfeed." It isn't easy, but done correctly, it can be very effective.

Affiliate links are finding their way onto popular mainstream news sites, allowing publishers to earn commissions for sales made to people who click through from the publisher's site. Monetized mobile news apps are also turning into an effective site monetization tactic for digital news publishers. The simplest way this is done is through a one-time payment for the app, in the $1 to $3 price range.

Paywalls are gaining respect as news consumers accept the fact that producing great, original content costs money. While you don't want to place all your bets on it, a well-designed and executed paywall can work wonderfully as part of an overall site monetization strategy that may also include revenue streams like traditional ads, custom job boards, affiliate links, and sponsored content. Finding the right mix of site monetization techniques may take some trial and error, but the growing acceptance of paywalls gives your news site an option you may have been skeptical of just a couple of years ago.