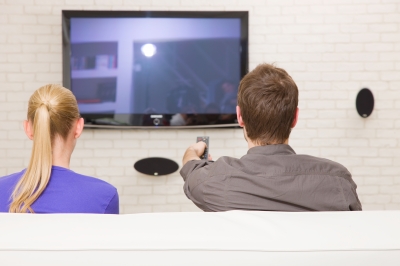 Several years ago, Netflix changed how Americans consumed movie entertainment by an efficient mail distribution paradigm that sent physical DVDs to homes. Over the years, Netflix added more of these movies to its streaming collection, and eventually phased out DVD distribution and collection. Today you're almost as likely to hear someone say, "I spent last night watching Netflix" as "I spent last night watching TV."

Recently, Netflix has put more skin in the game by distributing made-for-Netflix shows like series Lilyhammer, House of Cards, and Bad Samaritans. They also recently brought the series Arrested Development out of retirement, responding to a strong fan base that was less than pleased when Fox canceled the show in 2006. Just before the Arrested Development Netflix debut, Netflix opened a Bluth's Original Frozen Banana Stand in New York's Columbus Circle at the same time the networks announced their new shows. Coincidence? Not likely. There's a lot to learn from Netflix.

How the Internet Is Changing Television

The internet has changed traditional television delivery by creating a fragmented delivery platform for programming. Advertisers and networks haven't completely embraced this new reality, but they have little choice, since the number of consumers watching streaming video is increasing while the number of consumers watching traditional television is decreasing. The generations-long tradition of non-premium television programs being interrupted by commercials is becoming less palatable to consumers as they get used to paying a small fee to Netflix every month to see shows and movies without ads. Traditional television distributors are having to find innovative ways to protect profits as entertainment consumption changes.

How the Internet Is Changing Publishing

With publishing, the internet has weakened the power of the traditional gatekeepers of content: the publishing houses. Today there are new kinds of "publishers" who connect content and audiences, including search engines, bloggers, aggregators, and suggestion algorithms like Amazon's "People who bought this also bought ..." recommendations.

Today, rather than being published first and distributed second, the internet has made it so an increasing number of works are distributed first and published second as is the case when a blog, e-book, or video goes viral and the creator snags a publishing deal afterward. In other words, the whole power relationship between publishers, creators, and investors is changing. Writers and musicians have long complained about the respective industries' gatekeepers (publishing houses and record labels), but today you're just as likely to hear publishing houses and record labels doing the complaining. In short, these industries are being turned on their heads.

The important takeaway for trade publishers, newspaper publishers, and start-up publishers is that the new publishing paradigm presents some amazing opportunities. E-books and print-on-demand technology have drastically reduced the cost barriers to entry into publishing, and trade publishers or independent authors can now take their work straight to their audiences. In the traditional publishing world, selling 5,000 to 10,000 copies of a book was considered a failure, but in today's world of print-on-demand and content creators not bound by the traditional publishing pathway, that number can be quite profitable. If you're a trade publisher, in other words, the cost of getting your content to its audience is lower than it used to be. Trade publishers who run successful websites can also take advantage of numerous types of monetization streams online.

What Trade Publishers Can Learn from Recent History

Trade publishers who insist on sticking with the old publishing paradigm could be in for a world of hurt as those that take advantage of the distribution and advertising opportunities of the web along with e-book and print-on-demand technology prosper. In many ways it is a very positive time for trade publishers because audiences are online, and there are many great ways to reach them that didn't exist 10 or 20 years ago. Publishers that adapt and that are willing to commit to the strategies that make a website successful are the ones that will succeed in the new publishing paradigm.

If you run a trade website and are interested in exploring monetization strategies, check out what RealMatch is doing in recruitment advertising for trade publishers. We can help you make the most of the new publishing world that is emerging in the second decade of the 21st century.