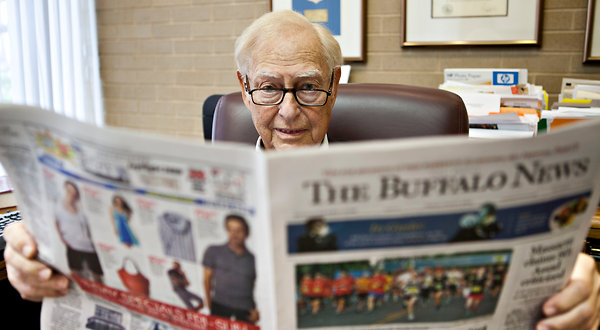 In the midst of the financial chaos that occurred in 2009, billionaire Carlos Slim loaned the owners of the New York Times $250 million. The Times had its financial back up against a wall as its credit line was about to expire and the company needed to solidify its cash position. But the amazing part about this story is not that Slim loaned a quarter of a billion dollars to a newspaper, but that the newspaper is poised to pay that loan back, at an amazingly high interest rate, by the beginning of 2016.

Why would a billionaire like Slim put so much money into a newspaper? It turns out that the Times Corporation raked in a few extra dollars by selling the Boston Globe, another newspaper, to billionaire and Boston Red Sox owner John Henry and About.com. A media investment by a billionaire turns into a nearly 100 percent profit at a time when other businesses are failing. Why do the world's richest men continue to invest in newspapers and what are these men seeing that the rest of the world seems to be missing?

SEE ALSO: Jeff Bezos and the Washington Post: What Does This Mean for Newspapers?

Some Call It "Civic Duty"

John Henry paid only $70 million for the Boston Globe and said that he felt it was his "civic duty" to save the failing newspaper. Warren Buffett went on a spending spree from 2011 to 2013 and increased the number of newspapers he owns to a total of 69. Amazon founder Jeff Bezos paid $250 million for the Washington Post in 2013 and has taken on the task of salvaging the iconic newspaper.

When you have that much money at your disposal, you can take on pet projects that you feel are important. The truth is that all of those newspapers needed that influx of cash to stay in business and without these billionaires showing up, many of the country's most recognizable newspaper titles would have closed their doors.

Of interest to online publishers is the other side of this story and that is a story of supply and demand. Buffett, Bezos, and Henry made their fortunes by identifying demand and then controlling the supply. Buffett has become legendary for his ability to identify need no one else seems to be able to see and turning it into billions of dollars. It appears as though the world's richest men are using newspapers to get even richer and no one seems to mind at all.

The amount of people accessing newspaper content online is rapidly growing. The popularity of mobile platforms has expanded the audiences for newspaper content dramatically and these billionaires see a need that has to be filled.

For now, much of the news content people get is free or relatively low cost. But if Warren Buffett sees a day very soon where newspaper content will become profitable using online subscriptions and advertising, then that is something that most online publishers are finding very hard to ignore.