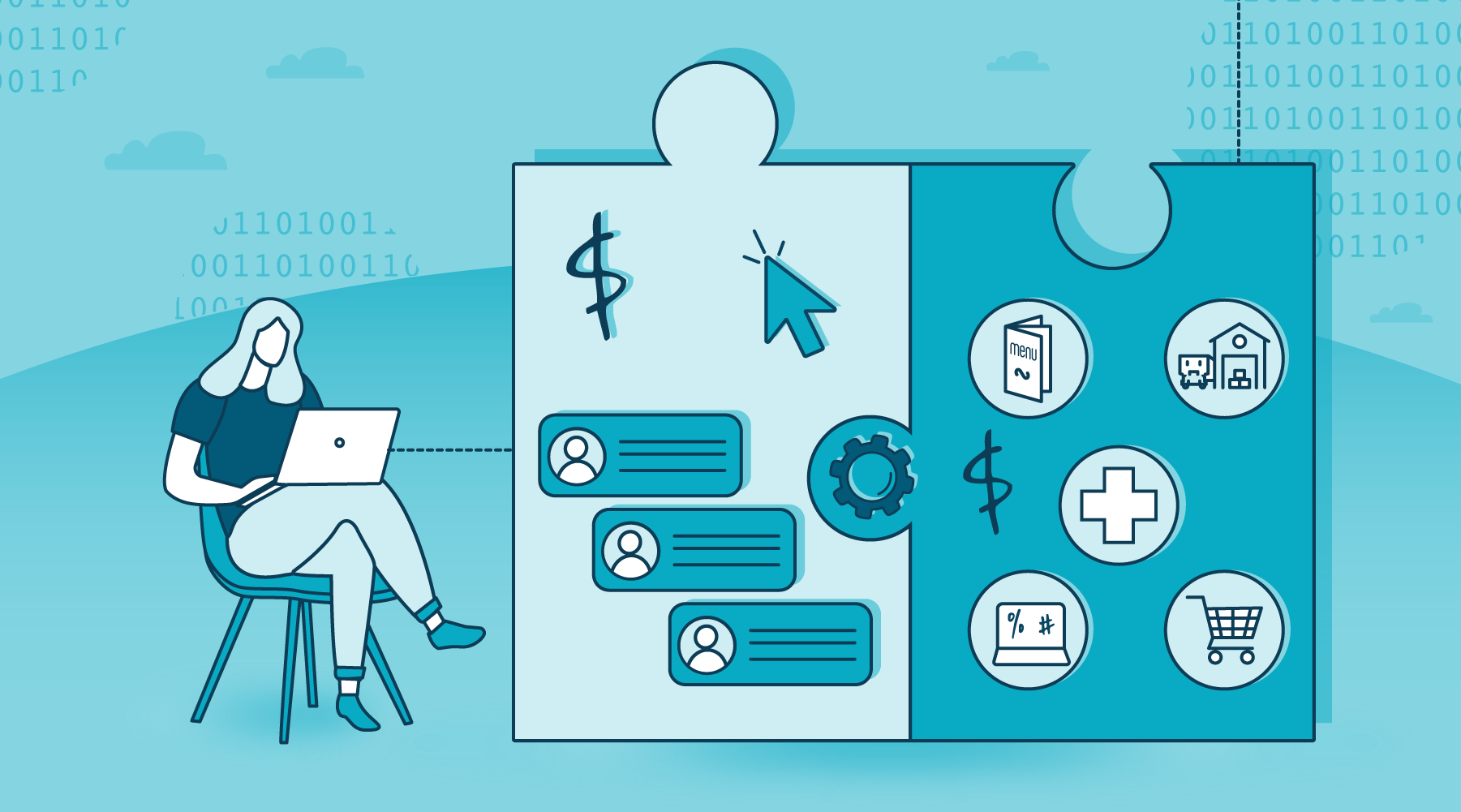 Over the past several months, the job market has been unpredictable. With a market in constant flux, it’s hard to tell where we’ve been and to see where we’re going. But as we embark on the latter half of the year, we’ve started to wonder what specific aspects of the market have been affected by the pandemic? With some help from our friends at Adzuna, we set to find out.

We looked at some key sectors in the economy, took our data about click and application costs and rates*, then overlaid Adzuna’s job volume data to see if we could find a pattern. Here’s what we learned:

Despite the global pandemic, the volume of healthcare and nursing jobs shrank along with the rest of the economy. According to Adzuna’s data, at the height of the crisis, 62% of jobs had been lost compared to normal levels.

As jobs began to fall, the CPC rate initially held strong, but then started to tumble as competition for applicants fell. At their lowest point during the crisis, average CPCs had fallen by 29%.

Meanwhile CPAs were a lot less volatile than they have been in other sectors that we looked at, and followed a similar pattern. As job volumes reached their lowest, CPCs and CPAs followed.

What’s happened since then is that job volumes have started to climb back up, as have CPCs, but CPAs have remained low and reached their lowest point.

According to jobseeker behavior on Adzuna, the number of people searching for jobs is climbing back up, having fallen during April and May, so it appears that there are more people back on the job market, and application rates are returning to normal levels. Added to this, the number of people in work in Healthcare according to the ADP payroll report in June is climbing back up having fallen 10% in between March and April.

Financial job volumes followed a similar pattern to Healthcare, only they fell much further and for longer. At their peak 74% of jobs were lost, and it reached this point a week earlier than Healthcare reached their nadir.

Like Healthcare, CPCs closely followed job volumes, although they started to climb ahead of the vacancy level’s slow recovery. What is more interesting is that CPAs had a large dip for 4 weeks, but have returned to their normal level quickly and have in fact grown.

Assuming all things are equal, this suggests that there is a greater competition to hire in this sector, but that the number of candidates looking for roles in this sector has not rebounded as quickly as other sectors.

Job volumes are now at 38% of their normal level, and CPCs and CPAs are both higher than pre-crisis levels.

Jobs in hospitality have been affected more than just about any other sector, and lost 80% of their usual volume of jobs. As bars, hotels, and restaurants had to lockdown, and turn away business, it’s no surprise to see that jobs were affected.

What is more surprising is how little CPCs were affected. There is always some fluctuation, but there was no overall downward trend here, as hopeful employers kept bids fairly static. What did change however was application rates, which fell dramatically during the peak of the crisis.

This had the effect of driving up CPAs by as much as 600% for about three weeks. CPAs have subsequently returned to normal levels, as application rates have started to recover to normal levels.

What this seems to mean is that there was a particularly panicked few weeks when potential candidates did not want apply for jobs in hospitality, which is understandable given global pandemic! However, there were still businesses who were looking to hire but were struggling to do so cost-effectively. However that period subsided, and now we are seeing rates that are more in line with normality, as job numbers increase.

Logistics jobs have some of the largest CPAs across all of these sectors we have examined. It is also one of the sectors that has been most resistant to the economics effects of the virus. One explanation is that there has been an increased demand for shipping and trucking services for people to receive things in their lockdown.

Related:  The Future of Diversity, Equity and Inclusion Report 2021

Despite this demand though, logistics jobs were briefly 62% down, and despite bouncing back more quickly than other sectors, they remain down on normal levels.

Unusually for these sectors, CPCs for logistics roles have increased consistently throughout this period. But on the other hand CPAs have remained much more flat, which is explained by the fact that application rates went up during the height of the crisis. Clearly job seekers could see that there were jobs in trucking, warehousing and delivery and so applied for them much more.

At the same time, businesses were willing to compete more for these candidates. This is despite a fall in the employment rate in this sector according to the ADP report.

Despite Logistics and Manufacturing sharing some superficial similarities (blue-collar, manual jobs, involved in producing and delivering goods to consumers), they behave a little differently.

Manufacturing jobs fell, but less than other sectors we’ve examined, reaching a brief dip of 59% of jobs lost, before quickly recovering to be only 40% down (for comparison, Hospitality jobs are 70% down still). CPCs remained fairly flat during this time and are only trending upwards in the past few weeks as jobs recover.

What is different is that CPAs grew during the crisis period. Admittedly this is from a low base, so hiring in Manufacturing is still cheaper than Healthcare for example. But costs grew by about 50%. The reason for this appears to be that application rates took a dive as candidates looked to stay away from Manufacturing jobs.

Why were people applying for Logistics jobs but not Manufacturing jobs? Perhaps because logistics jobs seemed more secure, and possibly more safe from the virus because they tend to be more solitary? Or that news reports suggested Logistics jobs were more highly in demand? We’re not entirely sure, but there seems to have been an effect on the average job seeker.

Last but not least we turn to retail. While essential retail businesses have remained open, other retail businesses have gone the way of hospitality businesses and have had to shut down temporarily. In April during the worst weeks of the crisis, job volumes were down 63% from their regular levels. They are recovering and are now just 50% down, suggesting greater improvements than hospitality, but they are well behind other sectors.

Retail has had some of the most volatile CPCs and CPAs, as they experienced serious spikes. CPCs more than doubled during some weeks in April and May, and have fallen since as the job numbers have recovered. This had a knock-on effect on CPAs which also experienced similar growth.

Retail sees some of the worst application rates across the sectors we were examining, and the crisis did nothing to change that. The application rates stayed remarkably flat, and low during the jobs crisis, varying by less than a couple of %. As a result CPAs are significantly higher than Hospitality, despite having a similar profile of candidate.

Covid-19 reduced jobs in every sector as firms looked to pause hiring, or were unable to hire for business reasons. Of course some sectors fared worse than others, but the patterns were similar everywhere.

But this change had a completely different effect on CPCs and CPAs depending on how candidates and businesses behaved. At times this created more inefficiency in the market as businesses who looked to hire were unable to find the volume of interested applicants. In other areas, such as Healthcare, this has meant employers had to pay less to attract applicants for their jobs.

In summary – supply and demand of jobs only tells part of the story. It’s not true that when the supply of jobs goes down, demand automatically goes up. Potential employees are a lot more discerning about the type of role they want to do, and Covid-19 has thrown up big questions about employee safety and job security that firms will need to answer.

*Please note all CPC, CPA, application data is reflective of the jobs in the PandoLogic System. All graphs show the percent difference in CPC, vacancies, and apply rates each week in 2020 as compared to weeks 1-7(pre-pandemic).

Choosing A Recruitment Software Vendor That Works for You