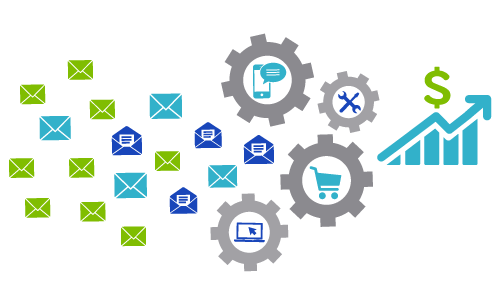 "Facebook is a massive threat, as they can offer segmentation by job title. It's only a matter of time."

That's how one responder replied to a recent Job Board Doctor Recruiting Trends survey. But social doesn't have to play Lex Luthor to your job board Superman.

Social media keeps growing and maturing. Some job boards are fading away. So let this be a period of evolution, not extinction.

Think of Social Media as a Vehicle, Not a Destination

Social media isn't a job board replacement. Sure, employers and social recruiters post job ads on LinkedIn, Facebook and Twitter. But that's only one way to use social media.

According to Work4, the average organization receives:

Those stats aren't too shabby. But think about it: if you spotted a great job that you wanted to apply for, would you intentionally increase competition by sharing it with everyone in your network?

What if you spotted a job ad that didn't interest you? Would you share it or scroll on past? That's a snag in the social media recruiting machine.

Social media isn't a destination, it's a vehicle that can drive people to a job board. You'll capture some interest and get some job applications through posting ads within your social networks. But social doesn't replace the hub that is a real job board.

Focus on the Best Social Channels for the Brand

How many companies use social media for recruiting?

The majority of social recruiting efforts focus on the big three: LinkedIn, Facebook and Twitter. Other social sites that can help spread the message include Instagram, Pinterest and even Snapchat. Each site has a dominant demographic and a different method of communication.

LinkedIn is usually viewed as the most professional of all social media. But even though more people think of LinkedIn as a career-centric network, its dominant user base might not fit with your goals. The same applies to every social channel.

Here's how JobCast breaks down the user base of the Big Three:

What about Instagram, Snapchat and Pinterest? Job ads aren't as common on those channels, but they can complement a well-rounded strategy. They're highly visual. So think about photos and videos to boost interest and get those all-important shares.

Social media is easy for users. Many people have a mobile app that lets them log in from anywhere. So why would anyone choose to navigate to a job board over scanning social media? It's simple: the total experience. Share a job ad, and you'll get some attention. Share valuable content, and you'll drive more traffic to your job board while building a thriving, trusted brand.

Content marketing communicates your brand message. In return, the audience gets something of value. In an era when people have a strong distaste for traditional marketing and advertising strategies, it's a life saver.

Consumers dislike interruptions, says Webscribble. They especially dislike online ads such as pop-ups. But they respond to content when the value message is authentic.

"What really works is the considered approach of sharing quality, branded content that is useful and relevant to their lives. The deliverance of ongoing, valuable content builds trust with consumers."

If job ads aren't the bread and butter of social media, what should you share?

Sharing content is only part of the job. Once you get a reader, watcher or listener's attention, the next step is guiding them to the job board. Every piece of content needs a direct path that drives traffic. That's a Call to Action or CTA.

It's simple to embed a CTA into a blog post. Add a catchy line that encourages the reader to "click here," and link it to your job board. But remember that everywhere you create content, you have another opportunity to drive in traffic.

Where there's content, there's an opportunity to link it to your job site.

A word about viral content: focus on providing value. But don't worry about creating a viral post. There's little rhyme or reason behind why one post gets thousands or even millions of shares and views while others languish with only a few. Usually, it's a combination of surprising content, a broad existing audience, and incredibly lucky timing.

The best job search sites know that relevant content produced at a steady pace wins the content marketing race. Produce and share something valuable on a regular basis and watch your job board traffic go up.

Show your audience some love and they'll be more likely to love you back.

Always Engage With the Audience

Do you know someone who doesn't quite understand social media? They post status updates and pics of their meals. They share vacation photos. And they wonder why their network isn't growing and nobody interacts with them.

To get attention, you have to share attention. That's the "social" in social media. Engage with your audience as often as you can, even if it's just a comment or two.

Share their comments and posts. Show them that you value their time. Otherwise, you'll be a faceless entity without a personality.

In every company's life, a little rain must fall. But don't let that discourage you from using social to its fullest. If you get a little negative attention from followers, don't worry. Consider it a chance to build an even stronger brand.

Of those 5 choices, only the last one is a brand builder.

Ignore a negative review or comment and you'll probably lose that follower and everyone else they know. Deleting a negative comment is almost as bad. You'll anger the commenter. And if they took a screen shot of the comment before it was deleted, they might post it. Ouch.

Hateful comments from social media followers can trigger an equally hateful response, but that's no good, either. It tarnishes the reputation. And believe it or not, apologies aren't always the best approach.

What's left? A sincere apology coupled with a real solution to the commenter's problem.

Become part of your social media community. It takes a little time, but the payoff is worth it.

Remember That Hyper-Niche Social Job Sites Aren't for Everyone

Have you heard the hype? Hyper-niche social hiring sites could eliminate job boards for good.

Not so fast. What about smaller companies that can't support or don't want such a concentrated effort?

The most recent story revolves around the mega-online company, Zappos. They no longer post job ads on any online job board. They've created their own social site, Zappos Insiders.

According to Personnel Today, Zappos was tired of hiring only 1.3 percent of their voluminous applicants. So they took thinks into their own hands.

Personnel Today says that some industry pros believe job boards will certainly die and that the Zappos move is an indicator of that shift. But there's a logistical hiccup. If you're not a nationally-recognized brand, how could you support an independent social hiring site?

Only a few companies have the volume to merit a standalone social media talent acquisition solution. For everyone else, and that's the vast majority of companies, job boards will remain relevant.

Career Builder UK managing director, Scott Helms, told Personnel Today that the most likely result in the short terms that job boards will have to rethink their approach. That's already happening, as job aggregators such as Monster scramble to find a new direction. And that circles back to value.

No, social media won't kill your job board. Not if you use it as a tool instead of a stumbling block. It could be viewed as a legitimate threat. But only if you let others reap the rewards instead of using it to its fullest advantage.

This is a time of great disruption. Industry giants are sourcing new avenues for growth. Upstarts are finding great success in unexpected places. Disruption is unnerving. But it's also healthy. That's when the greatest advances tend to break loose and carry an industry forward into a new era.

Ready to build a dynamic job board brand that resonates throughout social media? Subscribe to Recruitment ADvisor and we'll send you relevant content on the regular.

Job candidates can sometimes feel inconsequential to the sourcing and hiring process. They're frustrated by…

What if a Good Job Site Platform Isn't Good Enough?

Everything was going along swimmingly and then the job board market started to surge. New…

Job Board Platform Content That Transforms the Candidate Experience

The job hunt is in a near-continual state of flux. Old jobs become obsolete, new…